On the 18th August 2019 people gathered at Tandle Hills Country Park in Royton, Oldham to mark the 200th anniversary of the tragic events that became known as Peterloo.

Here our reporter Jean spoke to two activists (and cyclists) Lizzie and Sharon (pictured) about why it is important to mark Peterloo and how our generation wants to keep the memory alive and pass on activist ways.

Tandle Hills has an important and honourable place in the history of the working class movement. In the early 1800’s the Corn Laws were putting bread out of the reach of mill workers and large towns like Manchester lacked representation in Parliament consequently workers were agitating for change.  People from around Royton gathered in Tandle Hills to listen to speeches, discuss possible change and to drill.

Among the crowds that gathered at the anniversary event to listen to speeches, music and to see the unveiling of a new monument to those who were killed and injured on St Petersfield 200 years ago where a small group of mature women cyclist who had made the journey from Manchester.

Among them were Lizzie and Sharon, who I spoke to. 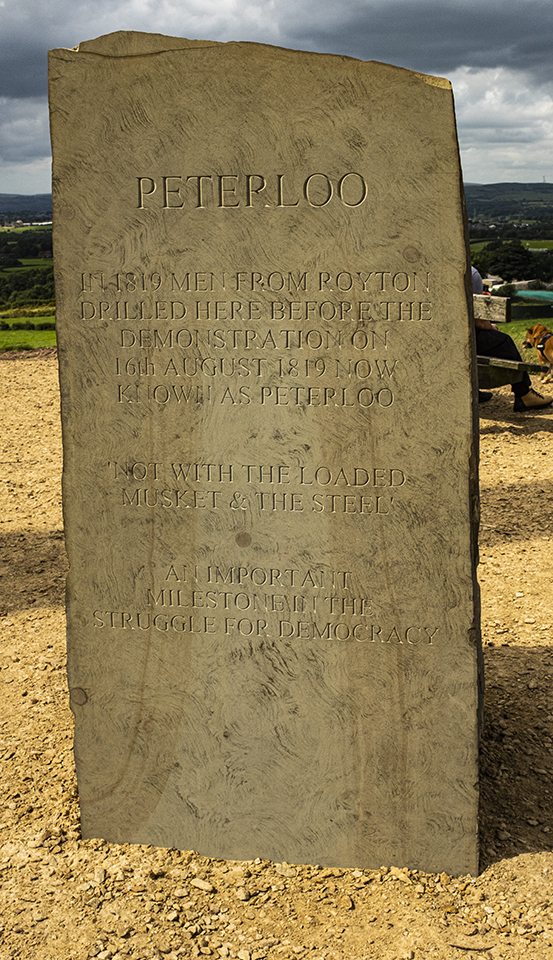 Why did you come to Royton today?

Lizzie: “I was keen to attend the commemoration events around Manchester and to be at the place where some of the marchers set off in 1819 to walk into Manchester.”

Sharon: “I have been taking part in various events around the anniversary of Peterloo and I was torn between going to the events in the city centre but I thought it would be more interesting to come farther out into what is now Greater Manchester and learn about the people who marched from Royton and surrounding towns”.

Do you know what the connection is between Peterloo and Tandle Hills?

Lizzie: ” People like Sam Bamford came here with people from Middleton, Rochdale, Royton and Oldham to drill so that the could walk in an orderly fashion when they walked to St Peter’s Field.”

Do you think it is of significance today?

Sharon: “Oh absolutely. I am a person involved in local politics where I live. I have always been a part of protesting since the 1980s when I protested against missiles at Greenham Common and then I supported the miners when they went on strike. I think we have a history of peaceful protest in this country but unfortunately there is also a history of us being attacked violently for it as well as verbally in the press. I am really proud of that peaceful protest heritage and it’s legacy. It’s sad that we always have to be protesting and demonstrating but it’s the only way we get things, it’s the only way we got unions.”

Should we continue to mark Peterloo?

Lizzie, “Yes, because it was a land mark event and it’s part of a continuum of struggles for rights and for working people to get what they have fought for, right from before Peterloo, and those rights can be taken away from us at any point and we have to be vigilant and to fight and to struggle to defend people’s rights.”

How should we pass this on to the next generation?

Sharon: “By carrying on, by demonstrating, by being organised, by encouraging young people to join unions and to be unionised and to keep fighting and standing up. We are seeing today things like ‘Extinction Rebellion’. A lot of young people are interested and are standing up. Older, mature people have led by example but I think younger people are now also taking a lead. I think there is a massive support out there to demand right.”

Lizzie: “I have also been impressed by the upsurge of activity amongst young people around ‘Extinction Rebellion’ and climate change. It’s their generation that will inherit the planet that we have ruined and I think that leads on to political activity in other areas like the closing down of places like Yarls Wood, the treatment of refugees and asylum seekers and homeless people. That’s the legacy that we have passed onto the next generation.”

How significant do you think Peterloo was?

Lizzie: “I think it was hugely significant because it was the starting point for many of the rights that people subsequently won over the following decades such as universal suffrage, annual parliament, secret ballot.  It’s  marker of how far we have come but also how much still remains to be achieved.”

Sharon: “It is significant. It reminds us how we do have to struggle and fight for every thing we want. We have keep standing up. We might not get the exact outcome that we want immediately, often it takes time and years, but anything is possible.”

For more information on how Peterloo was marked in Greater Manchester on the 200th anniversary click here.