January 10, 2022 by kirsty in category Communications, Passionate Pair, PR, Social Value, Talking About My Generation with 0 and 0
Home > Read All About It > Communications > Our team of older generation community reporters nominated for Queen’s Award for Voluntary Service 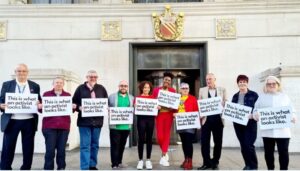 The Yellow Jigsaw team is passionate about delivering targeted projects that tackle the issue of media diversity. Our vision is a media landscape where the people who consume the news are the same people who make the news.

This is why we are so delighted that the team of voluntary community reporters at Talking About My Generation have been put forward for the Queen’s Award for Voluntary Service. And it is so well deserved.

We love working alongside the MyGen reporters and have done over the past two years to launch the UK’s first older people-led news team.

As part of their volunteering role the team conducts interviews, writes news stories about issues and interests of their peers, take photos, host training sessions, create their own printed magazine, podcast and much more.

Bob Alston, our Tameside community reporter, website and magazine designer and editor, said: “I have volunteered for My Gen since day one. Not knowing what I had to personally offer, it was quickly evident that over 50s in Greater Manchester needed a more prominent and forthright voice within each area, and all the volunteers bring something unique to the table.

“I continue to be a volunteer, although my initial role has changed somewhat. However, it is obvious to all involved that My Gen now has a wide and varied following that has spread further afield than just the Greater Manchester area.”

Kirsty Day, media director from Yellow Jigsaw, added: “These community reporters have gained so many new skills in the past two years and dedicate so many hours of their time creating content for the My Gen news platform and social media community, keeping their peers up to date with Greater Manchester news, views and topics that are important to them.

“They challenge ageist stereotypes in the media and promote positive, diverse and representative stories of growing older.

“And not only is My Gen a news platform but it also a support network – telling stories that resonate with the audience and provide connections with each other. During the pandemic, this news platform and support network have been more important than ever. They are a fantastic team who are fully deserving of this nomination.”

The Queen’s Award is the highest award given to volunteer groups across the UK and winners get a certificate signed by the Queen and a domed glass crystal. Representatives from the group may also be invited to attend a royal garden to celebrate their achievements.

Created in 2002 for the Queen’s Golden Jubilee, the awards have helped to shine a light on the fantastic work of voluntary groups for many years.

The awardees will be announced on June 2, 2022, coinciding with the Queen’s birthday.

For more information on Talking About My Generation go to www.talkingaboutmygeneration.co.uk