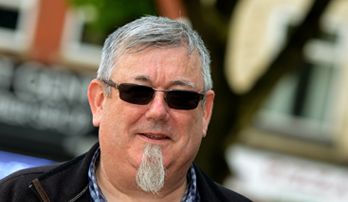 He retired in 2015 and joined Out In The City, a social and support group for members of the LGBT+ communities aged over 50, which he now runs.

The sad loss of his partner to pancreatic cancer shook his life and retirement but he remains active in the community, also volunteering at George House Trust (a HIV agency); and is a trustee for Manchester City of Sanctuary, an organisation that supports refugees and people seeking asylum and even hosts his own reggae podcast.

He joined the Talking About My Generation campaign to help breakdown stereotypes and support others and will be using his podcasting and radio skills to do so – as well as plans for a Living Library.

Tony says: “When I was a teenager, I thought 40 was old, and I don’t think attitudes to ageing have changed much. This programme will help to breakdown stereotypes and show different aspects of ageing.”