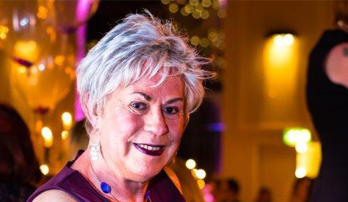 Our reporter, Pauline Smith, moved back to the UK in late 2007 at age 59, after 30 years living and working in Belgium, Germany and the Netherlands with no active personal network and as a trans woman.

Now she has a network of friends and is active in the LGBT Foundation’s Butterflies support group for trans people, a member of Out in the City, on the advisory board for the Pride in Ageing campaign and has been filmed by a student about her life, was recently on Radio Manchester to help launch the Pride in Ageing programme and has been part of a portrait photography session being supported by Getty that will show those over 60 can have a positive outlook.

Pauline has many interests from football, women’s fashion, current affairs, reading fiction and history and cooking, as well as travelling. She also speaks three other languages – Dutch. French and German. She is passionate about supporting the transgender community and enjoys being a member of the social group, Out in the City.

Her many skills – including preparing presentations, report writing, and interviewing – will support the Talking About My Generation Campaign, in which she wants to enable older people to enjoy being older and to help those who are vulnerable overcome loneliness and depression and to show that life can be fun.
Pauline says: “People see older people wrinkly and “past it”…or ‘invisible’ is the word that springs to mind. I want to show that older people are not frail and vulnerable, like so many pictures used in age related adverts.

“In my view 50 is still young, after all I started back here in Manchester at 60 with nothing.

“I want to show there are many new things to get involved in, in Manchester and that once you try new things – other doors open.
“I want the campaign to be bold and positive as older people still have much to contribute, both in the work place and in a social environment. Every day has new things to enjoy.”