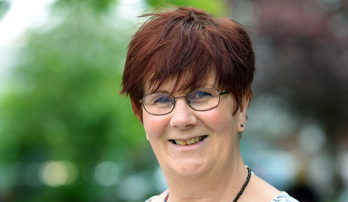 Our reporter, Lesley Downing, split her career between nursing and as an archive assistant. She is semi-retired now and is doing casual work as an extra/support artist.

She recently moved back to the North West after having lived abroad and in the south of England since 1987.

Lesley has a wide variety of interests from Richard III and the arts to walking, politics, green issues, music, detective novels, travel, film and live performances. She has also recently started to learn ballroom dancing with her husband.

She will be using her many interests as part of the Talking About My Generation campaign and is looking forward to interviewing people.

Lesley says: “Children see the over 50s in the role of grandparents and teenagers often don’t see us at all, along with everyone else who isn’t a teenager.

“Young adults view us as so far removed from their own life trajectory as to be irrelevant. Young parents see us as useful and irritating in equal measures, so good for babysitting but we nag too much.

“Mid lifers – 30-40’s are looking at us through narrowed eyes, wondering how they can avoid this ailment or that prejudice, slightly panicky – OMG is that what all this striving leads to. And for 45+, they ask, ‘How come they got to retire at 60 when I’m not going to get to retire at all?’

“How the over 50’s are treated parallels these views – useful to a certain extent, for specific things, but often dealt with as having no real stake in day to day or the future, no real contribution to make, and with views that are out of date, so therefore not worth listening to.

“There is sometimes resentment, as we are seen to have it easy with good early pensions, and a comfortable lifestyle that seems unattainable to the people just starting out.

“Generally older people are viewed as physically and mentally struggling in one way or another, not particularly productive in society, often requiring a lot of help/support.  Old fashioned, out of touch, unreceptive to change.  White haired, frail, woolly, be-slippered and vested.

To change attitudes we need to promote positive images and examples of ‘older people’ as pro-active, reactive, vital, engaged in society. Forward looking and invested in the future.”

Lesley sees this changing through the campaign by reaching out to older people to help, support and encourage them to be active, mentally, physically and psychologically, to maintain a presence in the here and now, and the tomorrow. And by reaching out to all other ages to showcase this positive, proactive view of ageing.