“It’s not the wrinkles, it’s the twinkles!” – event shows how to be age proud

Our reporter, Mike Dodd, attended the Greater Manchester Older People’s Network Action Group – to give a presentation on how to help change the record on ageing as part of the Talking About My Generation campaign. Here, one of our other reporter’s – Chris Vickers – reports on the day.

“Following arrivals and coffee, our host, Jan Kitching, a Greater Manchester Older People’s Network Action Group member, kicked off the day, followed by a short presentation by GMOPN member Elizabeth Lynskey saying that through her commitment to the group she had discovered the confidence to stand up and present in front of an audience, and also to organise social events such as quiz nights with her friends.

Liz Jones, an event organiser, then gave an overview of the Older People’s Network recent achievements including a national meeting of Age Positive groups met to debate relevant issues in Sheffield, 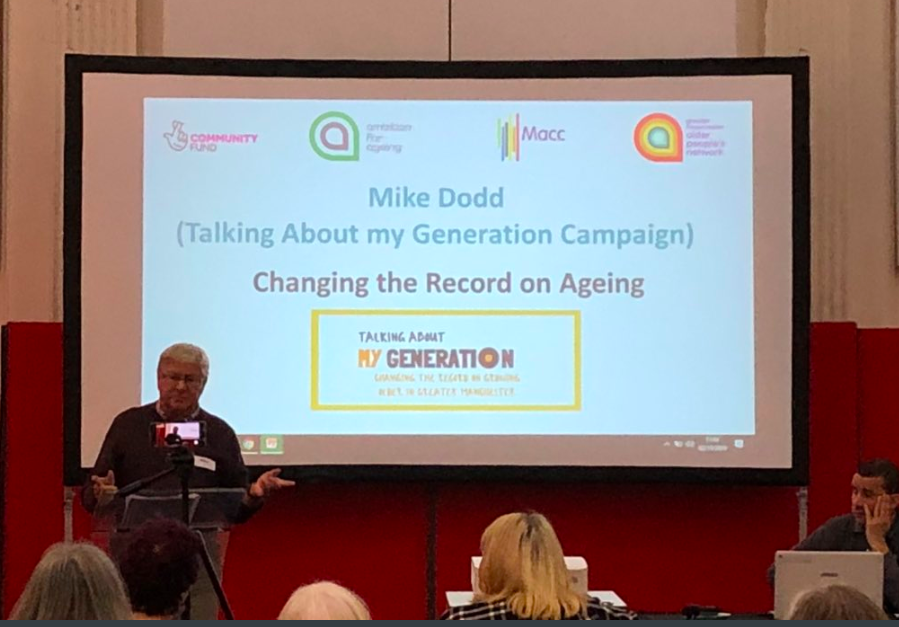 that a ‘Mystery Shoppers’ concept was being employed to establish best practise regarding housing issues for the ageing populace, cards were being handed to bus/taxi drivers’ where bad practise was perceived, and the reverse side had space to list positives also.

Our Mike then ran through the formulation of the group and some of the activities successfully achieved to date, and touched upon our upcoming events including the Living Library.

Then followed Paul McGarry, from Greater Manchester Combined Authority, who explained their initiatives, with their overarching targets focus on: economy and work; age friendly places; healthy ageing; housing and planning; transport and culture – where he showed photos of work by global artist JR on the sides of buildings, which was very impressive. He told us he would personally would be involved in the future on the GM Ageing in Place programme(AIPP) which focused on twelve sites targeted to become age-friendly neighbourhoods, and he also mentioned that GM were working in 85 sites around the county to rewrite the story of ageing but that whilst being positive it was important to be realistic regarding the challenges some face.

Following Paul was an inspirational lady known as Grandma Williams, whose positivity was infectious. She blogs about ageing and because she wrote about sex in older age was sensationalised and appeared on the morning show with Philip Schofield, whom she chastised on air for patronising her!

Joyce Williams then rubbished common perceptions of old age like satisfaction levels of life are higher at 73 than any other stage; and the myth that ageing costs public money in that elders are generally productive and only the last two years of frailty become a public cost.

After lunch we were entertained by the world champion whistler, David Morris, who was a revelation. A former cornet player and skilled musician, he has carved a niche for himself and has sound tracked adverts, for example, TSB and movies starring Brad Pitt el all, and appeared on several TV shows.

There were then two workshops, the second of which run by ‘Grandma Williams’ simply asked us to reframe the language around old age seeking a positive as opposed to negative frame.

The event closed and the consensus was that Grandma Williams  earned the phrase of the day: ‘It’s not the wrinkles, it’s the twinkles!’