REVIEW: A ground breaking performance from the trans community 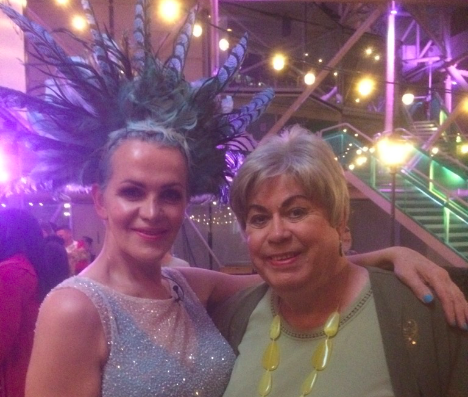 Kate O’Donnell, the artistic director of Trans Creative presented for one night only at one of Manchester’s iconic venues – the Royal Exchange Theatre.

It was a dazzling line up of trans and non-binary performers in a performance titled 100 Trans Voices as part of the Trans Vegas three day event in the city.

Our reporter Pauline Smith was lucky enough to be a member of the audience and also to be a participant in the finale, after two hours of humour, pathos and some fabulous singing; here she relives the highlights of the evening for us.

From my knowledge, this was the first such show of transgender and non-binary artists at a mainstream venue in Manchester, or probably anywhere in the UK.

It was a ground-breaking event in many ways and shows how far transgender and non-binary people have become more accepted.

We were on the first rows of seats in a horseshoe formation, almost within touching distance of the stage, so had a very intimate view of the performers.

The performance started in the dark and was a monologue by Mishary Ebrahim, an LGBT activist from Kuwait who was forced to flee his home to avoid persecution and perhaps even the loss of his life.

He entered through a side entrance to swirls of mist and the darkness was backlit so he was in silhouette, his tale was one that made us in the audience all focus on how many people like us outside the tolerance of the UK suffer deeply just for trying to live their lives as they want. And then we were treated to something lighter in a sense, but also about her own journey by Jo Clifford, who describes herself as a trans grandma. She talked about her early life growing up as a boy in the 1950s and reflected on how genitalia does not determine your gender and how hard it was to become the person you want to be. In a sense it was almost a polemic but it touched on parts of my psyche and I could tell that many trans people in the audience empathised as I did, and though I am not a grandma, I was moved by Jo’s powerful performance.

Next up was Pat Clinton who is anon-binary socialist – quirky, funny and spikey.

They came onto stage from the audience, helped up the steps by a helpful woman, I forgot to say that they walk with a stick. Their act is intentionally provocative, questioning the long wait times that anyone who is not rich and wanting to transition has to endure .and as they say like with disabled people you have to overcome bigotry and are appalled at the lack of knowledge amongst health professionals, so that you discover you know more than the expert across the desk from you.

This was a well targeted performance at those “experts” who don’t listen and don’t understand the needs of trans people, few of us are rich enough like Caitlyn Jenner to afford to make those choices, which would make our lives happier.

When Mzz Kimberley came on to the stage, my first thought was, wow! What a voice, she started with Bille Holiday’s song about black people being lynched, Strange Fruit. Powerful and stirring, she made the hairs prickle on the back of my neck.

She was what they used to call a Torch singer, with a voice that wrung out every emotion from your internal being as her voice soared and swooped and plucked at my heart strings. We had a lesson on how emotions can be a player when you don’t want them to be.

After the show I had a short chat with her in The Rivals “indoor beer garden” where everyone gathered. She was totally charming with her pooch under her arm and we talked about living in Germany, she studied there and still performs at German venues. A lovely woman, who even complimented me on my necklace.

After the break, we returned to our seats to be entertained by Jason Barker’s humour and his look back at his early years growing up in a small Wiltshire village. He started by laying out a picnic on a gingham tablecloth to highlight his yokel roots, The Wurzels song: ‘I’ve got a brand-new combine harvester’ was playing.

He then proceeded to tell us of the derivations of his home village, Sutton Benger, and concluded that it probably meant dung heap. Having grown up as a girl in a very small community Jason went up to London to seek his fortune and told us about that journey and appearing as a life size ovary in one of his memorable sketches.

A remarkable performance, droll and witty.

Krishna Istha is a London based performer, live artist and theatre maker, their performances look at transformations both physical and political and gender politics.  On the night Krishna gave a very provocative one-person stand-up routine, exploring all kinds of areas where many of us are uncomfortable and poked sticks into our comfort zones by using humour and wit to provoke us and make us laugh. Their performance had me, like many in the audience, laughing at Krishna and ourselves, as his barbs struck home – with jokes about packing and losing the packing!

Before Taylor Le Fin took to the stage, it was empty about from a supermarket shopping trolley, then Taylor bounded on stage to the sound of the Jarvis Cocker song Common People.

We were taken on a tour of self-discovery, acceptance, survival and hope. Blending spoken words with poetry, lip-syncs, comedy and heartbreak with a mix of Britpop nostalgia and karaoke sing-alongs. Stories of misshapes, abandoned shopping trolleys, regrettable perms, and being saved by “Jarvis bloody Cocker!” An ‘uncommon’ insight into the intersections of poverty, class, and the trans masculine experience.

Jo Clifford gave a performance from “the Gods”, or the upper seats in a theatre where the cheaper seats, with a single spotlight on her. It was a moving and thrilling soliloquy about how we are all the same, and then the light cut out and we were left looking at an empty stage, waiting for the final performance of the evening from the artistic director herself, Kate O’ Donnell. Kate is the star of the show and reflected on how her costume was originally made for her role as Feste in Shakespeare’s Twelfth Night in a blue to match the colour of her hair; that was in 2017 at the Royal Exchange. She reflects on how coming from a working-class family growing up in Coventry how hard it was growing up as a boy to be always interested in dressing up and performing, and she performed from a young age even in the cubs and usually played the girls roles. This led her to becoming a gay man and then a performer in the drag scene and in 2004 to transitioning and becoming Kate.

She asked the audience how many of us had studied Shakespeare at school and watched any of his plays and a good few of us held up our hands. Having a key part as Feste, who is the only Shakespeare fool to close a play and has the last word, was doubly challenging as she had never studied Shakespeare as a teenager, and she is dyslexic.

Kate talked about her early life and how hard it was to have a misogynist Irish working class father and two older brothers, who were basically “scallies”. Her mother was totally supportive from an early age when Kate was still a boy.

During her speech she made the point that if she had tried to put on the show 15 years before the audience would have been a handful of people and she would have struggled to get such an eclectic and wonderful mix of performers.

After Kate’s act the 30 Trans Voices Chorus in the audience, including myself, joined Kate on the stage and surrounded her in a circle and blew turquoise coloured petals from our hands towards the audience. The lights went out and when they went back on we all took a bow and rejoined the audience. 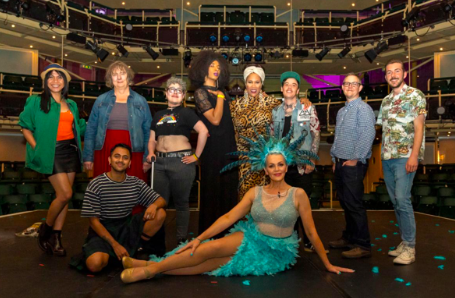 It was a wonderfully funny and moving evening that had the audience in stitches of laughter or crying with pathos. For me personally, I saw it as a milestone for the trans community.